There’s always something to learn, always wisdom you have not yet acquired.  Wisdom that, over my life, includes things like: you’re never the toughest guy in the room, there’s always a catch, and — my personal favorite — tequila does not make you more attractive.

It’s always good when you can add to that accumulated wisdom.  That’s what growing and learning is all about, isn’t it?

Have you ever tried to keep your eyes and ears peeled for a wandering grizzly when your, err, “guard” is down?

Write what you know, they say.  That unfortunately is the kind of thing I know.

On a more cheerful — and totally unrelated! — note, a German court decided the other day that a hangover officially qualifies as an illness.  You gotta love the Germans!  Now if only that ruling had been around when I was young, I wouldn’t have had to lie to my bosses quite so often…

Not that I would ever do that.  Of course not.  I would never spend the night with friends drinking beer and scotch in the back of a brewery.  Just like I would never call in to work the next morning with “food poisoning.”  Just what kind of slacker do you think I am, anyway?!

There are, of course, plenty of writing-centered life lessons to learn, as well.  I’m not going to put together a big list of those for this post, mostly because I want to focus on one in particular: you can never make everyone happy.

If you try, by the way, you will ruin not just your story but yourself, too.

Now, I have to give that little writing lesson some context, I suppose.  You absolutely do have to keep your intended audience in mind when you write.  Back when I used to train and teach salespeople, one of the things I stressed was always remaining focused on who and what was your victim…err, client.  If you thought only about what you needed as a salesperson, you were guaranteed to fail.

Here’s the thing, that little nugget of writing “wisdom” I mentioned above?  It applies to us writers…but only to an extent.  There was a great quote from S.E. Hinton a while back.  A high school girl at a Q&A event stood up and told her, “I got suspended for reading The Outsiders in class.”

Hinton looked back and gave her a smile, “I got the same thing for writing it in class.”

The Outsiders gets attacked — still! — on a regular basis for being “inappropriate” and “immoral” and for breaking all the then-current rules of convention and society.  It should never have worked, according to the experts of the day.  No one at the time thought kids were capable of reading something like that without turning into criminals and thugs.

It is also one of the greatest examples of a writer who truly did know her audience — far, far better than did the “experts” of the day.

Hinton didn’t worry about making everyone happy, she worried about making herself — and her audience, her real audience — happy.  And it kinda worked out okay…

On the other hand, when a writer crosses the fine — not to mention hard-to-detect — line between knowing their audience and pandering to them, they have abandoned all hope of creating a story that matters.  Worse still is when a writer panders not to their audience, but to the conventions and mores of, well, any of the closed, insular little worlds into which our society has split.

There are all kinds of “tests” out there for creative works; progressive tests, conservative tests, religious tests, secular tests, pacifist tests, violent tests…  Shit, there are even freaking vegan and omnivore tests!  When you are more worried about “passing” those tests than about writing your story, you have fallen into pandering.

Similarly, when you are more worried about keeping your audience “happy” than writing your story, you are equally pandering.

The Boy In The Striped Pajamas didn’t seek to keep the audience happy, it sought to make them uncomfortable as hell.  It sought to bring education and enlightenment through tears.  Just as, with The Outsiders, Hinton didn’t worry about making anyone happy, she sought only to tell the story that was so clear in her mind.

One of my all-time favorite movies is Au Revoir, Les Enfants.  Malle didn’t worry about his audience, or his producers, or the studios…he told his story, his coming-of-age autobiography.  And its last scene, the one people thought was “too sad” and “too depressing”, is what will truly stick with you.  It is that final image — that final, screw-you-I’m-doing-it-my-way image — that moves the film from “very good” to “truly great”.

*By the way, I once mentioned the concept of “story creep”…of the impulse to bring in thoughts and ideas that have nothing to do with the actual story at hand.  The same 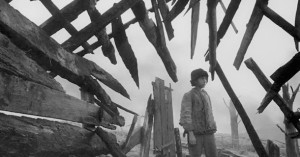 problem applies to this blog.  Thinking about the end of “Au Revoir” starts my squirrel-driven mind going down just all kinds of rabbit trails, especially about how to end a story or film with a truly impactful moment.  Without going too far off-point, or too deeply into the weeds, all I will say is if you want to know how to end a story, watch the brilliant “Ivan’s Childhood.”  Tarkovsky was a freaking genius.

I wish that lesson were easier for us writers to learn, not to mention to hold to.  Hell, I wish the industry itself were at all friendly to the concept.  But we struggle with it, and the industry is not.  All of the dynamics, in fact, push us to write our stories for others…to try to make everyone happy, except for ourselves.

We are not actors, to tell someone else’s story.

We are not pop singers, to perform someone else’s music.

We are writers, dammit.  If you can’t tell your own story — the story you want to create — what’s the freaking point?

I’ve mentioned before that my news and opinion reading is pretty dang broad.  I do my best to take in info and viewpoints from all across the spectrum, then run all of them through my own perspective (and BS filter) in an effort to come up with something approaching the “whole picture.”

You come up with some surprising results that way, by the way.  You come up with writers that you like — that you take quite seriously — even though you may not agree with the policies and positions and opinions they express (I’m looking at you, Richard Cohen).

That’s rare, however.  More commonly you find those writers who simply make you shrug, who are there just to read in the moment.  Every once in a while, however, one of those “blah” people surprises you…every once in a while you find a column or an essay that makes you sit up and take real notice of someone you had dismissed for years…

I ran across one of those this past weekend.

Maybe it was because the piece had nothing really to do with politics, but rather was about life itself…about life, and second chances.  Given that I, in the essay’s terms, am on my “second mountain,” this piece really resonated.

I cannot for copyright reasons quote the entire thing here, but I am going to put a pull-quote to give you an idea of what he has to say, along with a link to the piece itself.  It is…erm…a terrible title for the piece, by the way.  The headline has nothing whatsoever to do with what is actually written, but that’s not the author’s fault…blame the editors for that one.  Ignore the title and just read the essay, it’s worth it.

Some people are broken by this kind of pain and grief. They seem to get smaller and more afraid, and never recover. They get angry, resentful and tribal.

But other people are broken open. The theologian Paul Tillich wrote that suffering upends the normal patterns of life and reminds you that you are not who you thought you were. The basement of your soul is much deeper than you knew. Some people look into the hidden depths of themselves and they realize that success won’t fill those spaces.”