There was a story in Wired the other day that caught my eye. Now, I don’t normally read Wired, but it was a story about ”why sci-if is the most important genre,” so of course I had to have a go at reading it.

I’m not going to rehash that story here, instead I figured I would touch a bit more thoroughly on that question I get so often from friends and acquaintances: “why sci-fi?”

One thing to keep is mind is that that question, whether intentionally or not, comes loaded with all kinds of hints of disdain and criticism. It also comes with a need — an imperative, almost — to defend the genre, and the decision to write within it.

Because I want to.

Alright, there is more to it than that…

One thing to keep in mind is that I, as a sci-fi writer, try not to make stuff up out of whole cloth. Okay…I try to not to make everything up out of whole cloth. Rather, I like to take tends and developments and problems I see today, and play them out in my mind to see where they will lead. That those all seem to lead to places dark and depressing isn’t because I want them to … nosirree … they lead there because humanity could (and very likely will) fuck up a pillow fight in a whorehouse.*

I once said, in an old IWSG post, that sci-fi isn’t a petri dish, it’s a still. It’s not for looking at plots & characters in isolation, it’s for taking everything you think and know and believe, mashing it all together, and seeing what you can brew out of it…

Ahem. I think I broke the off-switch on my cynicism-gland…

Sci-fi also lets you explore and play with themes more than any other genre. As a story about two abused, exploited street kids, Somewhere Peaceful could’ve been set in any modern port city. BUT…by setting it on a space station, a few centuries in the future, I gave myself the ability to, err, compress a world of problems (our world of problems) into one small society. I also gave myself the ability to play with languages and cultures and social dynamics in ways I never would have been able to had I set the story in modern New York, or Boston, or Marseilles…

The fantasy story I’m working up, by the way, is a different ball of wax. Oh, the deadly sins are still there, but the thematic issues I have in the back of my mind are more internal and personal than societal.

Shit, maybe next time I should try to explore a genre I don’t write in — how ‘bout “why romance?”

That question gets the same answer as many other questions in my life: why not? 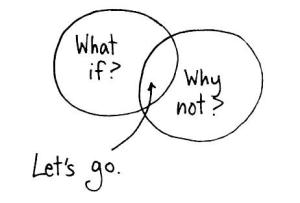 IWSG Question o’ the month: what do you love about the genre you write most in?

Nice question, folks!  It’s especially appropriate since I’m looking at the stories I want to write after I’m done with the Dockrat series.

I’ve talked before — a bit — about writing sci-fi.  First and foremost, it’s important to remember that I’m a nerd.  I’m a major nerd.  Sci-fi and fantasy have been tied for my first love since I was old enough to turn that jumble of big words and strange spellings into understandable stories.

Watching Star Wars and Outland and Excalibur and Alien(s)…

But — and this is the big BUT, for me — writing is different than reading.  Very different.  I might love to read sci-fi, but that isn’t why I’m currently writing it.  Not at all.  Hell, I’ve mentioned before my shameful, only-talked-about-in-private love of Downton Abbey, but that doesn’t mean I’m going to write soap operas about the early 20th century English aristocracy…

No, the stories I am currently writing (Wrath, Silence and Flicker) are sci-fi not because I love the genre, but because it serves the story.

I have, in all honesty, been asked and challenged as to just WHY Connor’s story is written as sci-fi when it could, just as easily, be set in 1970’s Boston…or 1980’s Marseilles…or Long Beach, or Brooklyn, or any of a dozen other “real” cities.

Honestly, the story is sci-fi for the same reason I love the genre: it’s not a lens, nor a dream, nor a filter…it’s a still.

Connor’s “world” in Wrath very intentionally distills the willfully insane socio-economic disparities with which I grew up (thanks, Los Angeles!), then mixes it with manifestations of the ever-growing problems I see plaguing the US today.  Dockside’s asian cultural and linguistic elements were then added as “seasoning” in order to foster a sense of otherness for my US-based readers.

That combination of elements would not be possible without the…errr…”lubricant” of science fiction.  That, as a writer, is what I love about sci-fi.  Oh, the ability to take on any and all themes is nice, as is the ability to take ideas and settings and, well, space-magic, and just run with them…but none of those compare with the flexibility and fun of building a world built to say what you want to say.

Quite simply, there are stories you can tell only in a sci-fi setting.  Oh, I don’t mean alien invasions and grand space battles…I’m talking about commentaries on societies and cultures and peoples.  The Forever War tackled the Vietnam War in a way not really possible in other genres.  The War With The Newts, Brave New World, Frankenstein, The Time Machine, (just to name a few of the oldest) all used sci-fi to tell stories about so much more than they were about.

When you get right down to it, the genre of a story is nothing more than one of a writer’s many tools.  It sits right there with setting and tone and language as a way to tell and define the story.  If sci-fi does not serve a particular story for me — or anyone else — then something else must be used.*  None of the future stories I’m toying with are sci-fi for much the same reason that Dockrat is sci-fi: each has a genre that best fits the story.

*But, use something else or not, sci-fi and fantasy are still my first loves — and, as we all know, you never really get over your first love!

I’ve been asked — more times than I can count — “who are you writing for?”

Now, look…I’m an ex-sales and marketing weasel.  I can bullshit with the best of ’em.  A question like that all-but FORCES me to bullshit.  But, sitting in a quiet pub with a nice drink, and some quiet conversation between just you and me, the truth comes out: who am I writing for?  Me.  I’m writing for me, and for the stories I want to tell.

And if those ghosts fluttering around the back of my mind, waiting to tell their stories, all have a sci-fi or fantasy bent? So much the better.

By the way, the next round’s on me…