And, no, I’m not going all New Age and hippy on you.  If you don’t believe me about the feeling of a place, have another look at the pictures I posted a few days ago of a burned stretch of forest.  Although a walk through a space like that is the best — and strongest — way to truly experience its eery, powerful presence, you still can get a sense of that through the photos themselves.  It touches you, a place like that.

Wait, what?  You still don’t believe me?  You still think I’m being overly, ahem, writer-ish?

In my travels, I have seen and done many things.  I’ve gotten the chills lighting candles to my dead sister in cathedrals across all of Europe…

I’ve been swept away by a true sense of infinity sitting at the end of a jetty at sunset, with nothing but water and fire and the end of the world in front of me…

Now, there is something about that place that gets to everyone who visits…and I do mean everyone.  It’s different for every person, of course, based on their own psyches and outlooks and life history.  For my brother, with a young daughter at the time, it was the display of children’s shoes.

For me, it was…well, there’s no way to sugar-coat it, it was the gas chamber.  The small, “test” chamber the Nazis built in the “model camp” to test and prove the concept of gassing their victims.  You can go inside that room.  From just outside the door it looks a whole lot like a shabby, beat-up gym shower.  A shower with a few strange fixtures in the ceiling that don’t quite belong…

Then you step inside.

Then the feeling hits you.

I lasted less than five seconds before I had to get out.

That is the feeling of a place.  That is the kind of thing I’m talking about. 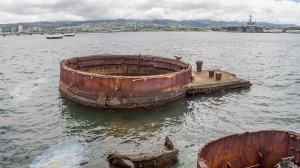 Not the grave of the USS Arizona, not the monument to Warsaw’s doomed young insurgents of the ‘44 uprising, not even the grave of a friend, has the power to bring me to my knees in the way that one small, cramped, dingy room does… 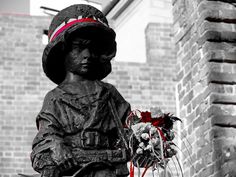 The power, and the feeling, of a place is very real, and very, very potent.

It’s a bit self-centered, but I’m going to give an example below from my own writing because we, as writers, have to understand the power of a place.  We have to feel the power of the places we write about, whether they are real or exist only in our own minds…if we don’t feel that power, how the hell can we expect our readers to do so?

Connor led Nat down a tight alley in the very corner of the hold, an almost-invisible passage barely wide enough to walk single file.

They turned the corner at the end and that alley opened into a wider passage. The emptiness felt strange to Connor. It felt very strange. That space didn’t belong, it didn’t fit; space in the Market was far too precious to waste like this.

On the walls, burned and twisted plastic had been artfully cut and shaped into subtle, stylized flames. The detritus of the fire, turned to memory. Connor slowed. The flames felt all too real. He wasn’t sure he was ready for this.

At his side again, Nat hugged his arm and walked with him down that forty-foot passage. The flames were just the beginning, and the closer to the end they came, the more Connor slowed. His throat closed as memory and emotion welled. The demons were coming out…in force. He knew he needed to do this, knew Oz was right, but he wasn’t sure he could pay the price.

There was always a price.

The Memorial itself was simple, in the way the most powerful things always seem the simplest. A bronze statue of a man huddled in the corner, knees drawn up and face buried in his hands. That was it. No grandiose inscriptions, no bright colors, nothing but pain and loss.

Connor could understand why no one stayed long, could feel his breaking point coming near.

He stood in silence, lost. Nat was still holding his arm, leaning against him. His whisper was barely audible. “That’s my dad, Nat. At least to me.”

“Your dad?” Nat’s voice was equally quiet, breaking with her own emotion. “He was killed…in here? He was part of the Riot?”

Connor knew she couldn’t see, but nodded anyway. “My dad was a drunk and a fool, but there wasn’t a drop of violence in him. He never hit me, not once, not even when I deserved it.” His quiet whisper held sadness, and a great deal of bitter rage. “I still don’t know if he burned in the fire, or was shot by the mappo. My life ended that day, Nat. All because my dad decided to go fucking shopping.”

That could be his dad, just sitting there, silent. Dead. While hers sat in luxury and comfort…the man who did this.

“He dreamed, Nat,” Connor continued, talking to himself more than to her. “He never accomplished shit, but he always dreamed. Always had some plan to make our lives better. I resented the hell out of him as a kid. Resented that he brought us here, resented that his dreams always failed. I thought I hated him, at the end there.” There were no tears, but his voice was almost inaudible, a sigh more than a whisper, “God, I miss him.”

And, of course there’s a song for that…err, well…I’m gonna stretch for this one.  It is not as much a place as a time, but the memories and feelings are just as indelibly imprinted: