I’m thinking about taking off for the wilds of Montana/Yellowstone.

I’ve been spending the last couple of weeks talking to folks about jobs and opportunities up there.  Now, I don’t know whether any of that will work out or not, but it is something I’m looking at semi-seriously.

Then…well…then I decided to get back to reading the news, and to posting on the blog.

What the fuck is wrong with us?

Never mind, I’m pretty sure I don’t actually want to know the answer to that… 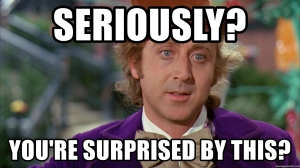 Anyway, I sat down and read about the “college admissions scandal” currently in the US headlines.

No, really — WHAT FUCKING SCANDAL?!?!

Unqualified, unacceptable — downright unintelligent, even — kids have been getting into college on the coattails of Mommy and Daddy since…oh…about the day they first opened the freaking doors almost a thousand years ago.

Just what kind of fantasy universe do you have to live in, anyway, in order to be surprised by this kind of shit?!

Now, I am NOT going to get into “privilege” and all the loaded code-words that go with that particular concept nowadays.  Not a chance. But…but parents pulling strings for their kids…parents using old friends — using connections, using influence, using money — to help their kids get ahead is about as “new” as, err, DNA itself.

Again, I have to ask: just why the hell are we surprised by this?

Does anyone really think this is new?!

I’ve mentioned before that I am…err…umm…well…an idiot.

I admit it, I’m an idiot who has the same level of common sense as your average goldfish…

Exhibit A of that idiocy, I should explain, is that I didn’t use my parents to get ahead in terms of college.  Look, I have degrees from two different universities, but neither of them is all that “major.”  My parents, on the other hand, have a certain amount of *ahem* influence with one of the largest universities in the world.

Not making use of that influence was actually one of the biggest mistakes* of my life, by the way.  Err, okay, so such influence and assistance was never actually offered to me, but still…I’m a good enough sales-pimp to have lied and schmoozed and weaseled my way through…if only I had been smart enough to try…

*And trust me, there is A LOT of competition for that particular title!

No, this whole “scandal” has nothing to do with colleges, nor with fraud.  The true fraud involved is our (societal) fetishization of college degrees…our over-reliance on the “blessing” of a degree from any institution, regardless of reality or need.

Honestly, just why the hell do we think 90%+ of the workforce needs a Bachelor’s?  Do we really want to create a situation where mandatory education becomes damned near 20 years*?!?!  And, yes, if you add it all up, preschool + kindergarten + elementary school + middle school + high school + college BA = 18+ years!!

All that time — all that MONEY — does nothing to change the fact that folks like electricians, and plumbers, and carpenters, are far more important to our society — not to mention our economy — than every single one of us History majors added together…

I have a friend from my hockey world.  A nice guy, if someone even more quiet and withdrawn than me.  Now, this friend of mine is happy as a clam with his career.  That career happens to be his own business — making a pretty decent living — doing high-end, custom cabinetry…a skill he learned in his own damned garage.

You want to know what my friend did before he struck out on his own to do that?  He was a senior researcher for the freaking EPA…

Yeah, that PhD — and the hundred thousand+ dollars it cost — is really helping him now!

On a personal level, I made the most money in my life as a sales-monkey.  My success in that (miserable) world came not because I have two college degrees.  Nosirreee, not even close.  No, what made me successful in that career was the ability to empathize and put myself in someone else’s shoes that I learned — had to learn! — as the youngest of four kids…

As a society, we have made a college degree a requirement — a talisman and magic entree to success — and THAT is the real problem.  No more than 10-15% of the population actually needs a degree.  The rest of the jobs in the universe can be filled by anyone with the aptitude and willingness to learn…

But, we have let “Human Resources” become the be-all, end-all of the business world.  We have let bureaucrats who want to check boxes and tick-off items on lists become the ultimate arbiters…

…yet still we have the temerity — the stupidity — to be surprised when folks with money and influence work to “cheat” the system.

I despair for us, I really do.