What the hell is happening to us?

I’ve mentioned before my belief that what will finally destroy the US, as a nation and as a culture, is our descent into the madness of defining political opponents as enemies. I didn’t think, at the time I wrote that post, that I also had to spell out the corollary that defining speech and points-of-view with which you disagree as dangerous is just as bad…

But that’s where we’re at.

What in the hell ever happened to the concept of defending other folks’ right to say things you may not personally like? Are we really going to keep going down the path of listing as dangerous and evil those words and opinions with which we don’t happen to agree?*

Yeah, that civil war I expect ain’t a decade off, it’s right around the damned corner. We’re pretty much fucked.

The worst part about writing this post is that I despise the asswagon who spawned it. Alex Jones is a tool, let’s get that out in the open right from the get-go. He is that rare blend of lunatic, asshole and fool all rolled into one. He is, when you get right down to it, everything that’s wrong with humanity in one unpleasant package of uselessness.

But that doesn’t make right the various social networks’ silencing of him, and voices like his. Look, I ignored InfoWars and the other idiocy of Jones’ ilk from Day One because it was pretty obvious just how unhinged those folks truly were. So did many, many other people. A free marketplace-of-ideas means folks are free to say and write pretty much whatever they want, but it also means the rest of us are just as free to ignore whatever we want. If something is stupid, or foolish, or demented, or just plain vile, then the answer is simple: DON’T READ IT!

But that’s not enough, not anymore. No, nowadays the only answer, apparently, is to actively silence the writers and ideas that used to be — quite successfully — ignored and marginalized by normal folks.

Are we really so terrified of the ranting inanity of people like Alex Jones that we have to eliminate their very words? That’s not just stupid, it’s more dangerous than he could ever even try to be. 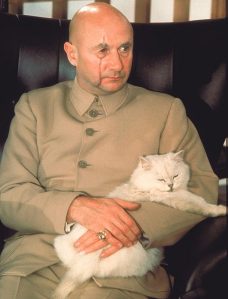 Apple and Facebook and Twitter and Google and the other players in the modern tech game did not create the divisions and dangers that threaten everything about the US today, but they are making them worse. Oh, they’re not sitting there like liberal Blofelds, stroking cats and planning to fuck with the weather…no, what they’re doing is much worse than that: they’re acting out of cowardice and pure, short-sighted greed.

They don’t want to be criticized. They don’t want to be protested. They want only to siphon every penny they can, and control every bit of data they can, with no interference or trouble. They want to be the robber-barons that they truly are with no discontent, and certainly with no interference or disagreement. And they want all of that without disturbing their self-images as the torch-bearers of tolerance and progressivism that will save humanity from itself.

The decision to shut down various voices — whether loony ones like Jones, or the everyday voices of conservatives and libertarians that have been silenced by the social platforms — simply allows people like Tim Cook and Mark Zuckerberg and Jack Dorsey to avoid criticism or protest for “hosting” such voices, while simultaneously playing into their personal echo-chamber-dominated, rose-tinted view of themselves as “protectors and champions.”

I can’t cuss enough to show my derision for that particular sentiment, by the way. I can take care of — and think for — myself, thank you very much, Mr Cook.

There are moves afoot to silence voices on all kinds of topics…from global warming, to immigration, to various social and economic philosophies, the go-to response has become to silence, rather than to dispute. To silence, rather than to debate and educate. What we are growing is a New Orthodoxy, one that is never to be questioned, let alone disagreed with…for the “good of all,” of course. 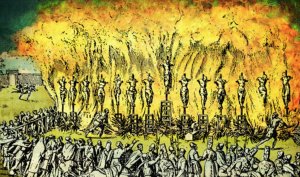 We’re watching a modern, electronic auto-da-fe of which Savonarola would be very, very proud…

*I can’t even imagine not reading ideas and thoughts and opinions that are not just different, but are diametrically opposed. The friction between viewpoints really is the only way to pull aside the layers of bullshit and confirmation bias and get at something resembling the truth.  Just to give a bit of an idea, here is my regular morning reading list: The Drudge Report, The Guardian (both US and UK versions), Fox News, BBC News, The Washington Post, The Nation, Reason, The Hill, The Cipher Brief, The National Review, and the Real Clear “family” of sites…