Ugh…streaming video can be a dangerous thing.

In general, since I killed off cable, I watch much less TV…and I (usually) waste less time watching random crap that is of no real interest to me. On the other hand, I also have this nasty tendency to head down rabbit trails of binge-watching… 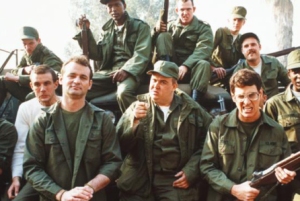 I watched Stripes last night. Well, let me amplify that — I watched Stripes for about the 10,000th time. I can — quite literally — quote that entire movie, line by line, from beginning to end. So imagine my surprise when the version I was watching last night started throwing scenes at me that I had never seen before.

This is Stripes, for God’s sake…nothing should surprise me about that movie!

I had to back out of the movie at that point and check out just what the hell was happening. I know I should be surprised that someone decided to put out an “extended cut” of a 30-year-old lowbrow comedy, but I’m not. Sadly, nothing about Hollywood’s money-grubbing desperation surprise me anymore…

NO! I am not giving in to that particular squirrel-moment! I have a post I want to write, dammit! This is NOT a Hollywood post, it’s a writing post!

Now, I should probably point out that I am in fact a fan of watching extended cuts and deleted scenes and the like. But I’m a fan of those things for different reasons than the studios and directors actually intend; I watch them not for “more,” but rather to study and learn and understand just why those scenes were not included in the movie in the first place.

Few movies benefit from the re-introduction of deleted scenes. Most, in fact, are made worse. It is that “made worse” that offers valuable insight and instruction for writers: Not every scene works…not every scene should be included.

Look, when we conceive and plan and write a story,* we are usually too damned close to the material to evaluate dispassionately just what scenes — and portions of scenes — work, and which drag the story down.

In spite of all the revision and editing passes we do with our stories, that closeness to the story is why we still need good beta-readers. We need outsiders to point out just when a scene belongs on the cutting room floor.

The Stripes Extended Cut reinforced that reality for me. Without exception, the extra scenes I watched added absolutely nothing to the movie. Worse, they took away from it. At the end of that now-two-hour movie, I was less than impressed.

Of course, being a writer, I also took the opportunity to reflect not on the one-and-only shitty experience I’ve had with Stripes, but to focus on trying to evaluate my current scene-list for The Silence That Never Comes.

Somewhere Peaceful to Die, for a separate example, was by no means “long”, but it still held half-a-dozen scene-fragments that were — as was pointed out to me — better removed. But it took someone else to really point out that to me…I was too close to the material to say that to myself.

You can imagine my reaction to that advice to cut them…probably better than I can illustrate it. “But…but…but, this scene is important! It reinforces X about Character Y!”

You know what? That beta-reader/editor was 100% right. After I made the changes, the story did flow better. The cut scenes did drag things down, they did take away from the story itself.

So, for you other writers out there, I’ll offer this homework assignment: pick a handful of your favorite movies, and watch a video (YouTube is your friend on this) showing a roll of scenes deleted from it. Then think about how those scenes would change things, think about why the writers & director originally wanted them, then then why they chose to cut them.

Was the scene with Bill Murray and Harold Ramis dropping acid with Colombian guerillas funny? Kinda. Did it belong in the final version of Stripes? Not a chance in hell.

Look at my “homework assignment” and remember my oft-expressed lesson: writers need to learn from everything.