Hey, look: a practical writing post! I haven’t done one of these in ages…

Now, I realize I don’t have to describe the concept of a “beta reader” to the other writers out there, but not everyone is insane…err, writing. So, for you sane folks, an explanation: a beta reader is someone who reads and critiques a story during the revision process. 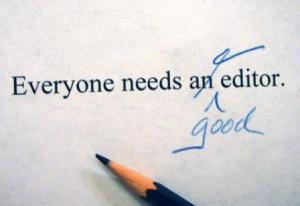 For someone doing long-form writing, that means either handing over a full manuscript, or dribbling the material out chapter-by-chapter. In either case, the critique process is one of the most valuable in the entire editing & revision loop.

It is also by far the hardest to get right.

Finding beta readers is easy. Finding good beta readers?  Finding those who will be honest without worrying about “offending” you, or “hurting your feelings”? That’s hard…really hard.

As hard as it is, however, it is also very necessary. I don’t know about you, but after spending a few months on the writing and initial editing of a 100,000-125,000 word manuscript, I am too close to the material to be truly objective. Hell, I would argue that after those first couple of editing passes, most writers — hopefully it’s not just me! — are pretty much inured to the remaining problems in a story. Whether a “missing” scene, or excess words & thoughts that break the pacing, or something else, it’s all too easy to become blind to a story’s faults.

Oh, sure, we writers could step away from a semi-finished story for months — or a year, even — to let the “distance” grow, but that solution is as silly as it is impractical. Finding the faults, when you get right down to it, takes outside eyes.

For most of us, that means turning to friends and family first. “Hey, Bob reads a lot…I’ll have him give it a read!”

I don’t know about you, but the family & friends solution has never been terribly successful for me. When I give something to a reader, I don’t want “feedback”, I want full-on criticism. I need to know the flaws and problems, I need honesty. I live for the day I hear someone say, “This chapter is freaking broken” or “This character is just obnoxious.” God knows, it’s probably a bit too much to hope to hear, “This scene drags, it would be better without it.”

There are writing groups out there, both in person and online, that can help serve this function. Sometimes, they serve very, very well. But other times? Other times, they can have enough negativity, bitterness and internecine squabbling to make you long for your kindergarten days.

So what’s a cranky, needy writer to do? Well, based on my latest experience, the answer is simple: hire someone.

And, yes, I am “preaching” about this because I recently used this very type of service. I had a story that was mostly done (story-wise, not detailed editing-wise), but there were still flaws. I knew there were flaws, but I couldn’t quite put my finger on them; I was too close to the material. I needed help, so I hired it.* It was, in all honesty, the best thing I could have done for that story.

If you already have good, honest beta readers…congratulations! I’m jealous. If, like me, you struggle to find them, I would strongly suggest that you do not simply rely on yourself. Trust me on this: that way madness lies. Nope, go out and hire those outside eyes.

*If you’re curious, I used someone I found through IWSG…and I endorse the heck out of her. Thank you, Chrys Fey!