Okay, okay…it will surprise exactly zero people to know I’m sitting in the taproom as I write this.  But I do have an excuse, this time.

Yes, you heard that right: Beer Madness.  Just like March Madness, but…well…a hell of a lot more fun.  We don’t sit and watch a bunch of players run up and down the court.

No, sir…that would remind us just how little we are able to run up and down the court.  Nope, instead, we do it right, we stick with what we are good at: beer.  Everyone chooses a beer to enter into the contest, then we have head-to-head battles until one champion reigns supreme.

You’d think this was my metier…you’d think I could dominate at this kind of thing.

You’d think, but you’d be wrong — I’ve never made it out of the first damned round. 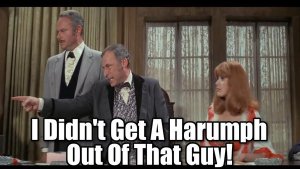 This year will be different.

This year my Bourbon-Barrel-Aged Double Apricot Blonde will get me at least ONE win.  There is NO “next year,”not this time.  My beer & I are all in.  It’s full-Miracle, or nothing — hell, I can hear Herb Brooks in my mind right freaking now!