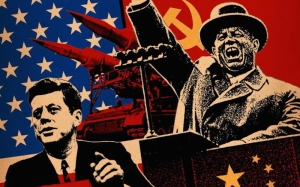 An American red, fighting for its life against a vestige of the Russian Empire. Rivers of the lifeblood of England, swirling and circling around as they fight with that of the Czechs. And Germany…Germany torn asunder, and clashing with itself, region by region.

The Cold War in beer.

Can an English brown beat a Czech pilsner?

How about a Munich helles lager, struggling against a porter from the Baltics?

We never fought with guns — let alone with the nukes most folks expected — but we DID fight with beer. Beer was a MUCH better way to solve our problems.

Look, there a million ways to guide yourself in choosing beers. Whether by style, or flavor profile, or region…take your pick. They all work, along with a dozen other methods. But…

But, you should have fun when you start exploring beers. You should, when you get right down to it, be a bit silly. Give yourself some guiding principle, some lodestone with which you can navigate — it doesn’t have to actually make sense, it just has to be fun.

You could do a great deal worse than to refight or relive the great struggles and moments of history through those beers that are “characteristic” of the players involved. Crap, what have you got to lose? Beer snobs are just as bad as wine snobs: they’re not gonna take you seriously, anyway, so have at it! Have fun!  Be silly, be stupid… Silly and stupid, by the way, are great ways to learn. Just ask any college freshman.

And, yes, I have indeed fought the Cold War in beer. The red team versus the blue.

We each picked a side — NATO versus the Warsaw Pact — then a country. Those countries fought, beer by beer, until the world stood under the domination of the winners. Until, when all was said and done, every palate lay under the beer-power of one side or the other.

I led a poor Czech division, I should mention, trying to use my pilsner-cannon to defeat a mighty fortress built from English brown ale. It was a hell of a fight.