The stars (mis)aligned, I think, and I didn’t get my IWSG newsletter/prompt.  Dagnabbit!  I actually look forward to those things!  Ah, well, I’ll tackle a writing-specific post, anyway.

Now, if I’m honest, most of my blog posts can be rather, erm, random.  In general, they reflect mostly what I’m thinking at whatever particular moment I sit down to write them — which, most often, is when I’m taking a break from other stuff.  I DO try to tie all (well, most) of my posts back to writing, but sometimes the rest of my brain decides to just take over and write about other stuff.

So, since today is the first Wednesday of the month, what to write about for IWSG Day?

Oh, hell, why not?  Let’s go with it: frustration & failure.

Simply put, writing is the most frustrating thing I’ve ever done.

Look, I play hockey at a (fairly) high level.  I do my best to ignore reality and play with folks who once made the sport their living (and some who still do).  And you know what?  The frustration and difficulty in THAT is a whole lot less than what comes with writing even a single story.  To be embarrassed by a player young enough to be my child is easier to take than those days when the words just won’t come…those days when, in sports terms, I just “don’t have it”.

In all honesty, there are those days when I wonder if the words will ever come again.  Kinda like the last two months.

Yeah, I’m in the middle of that frustration.  I’m fighting myself.  I’m fighting the vision that was once so clear…and is now, to all intents and purposes, gone.  I have, to return to the sports motif, lost my confidence.  And not just a little — I’ve lost all of it.

To put that statement in context: aside from these blog posts, and a handful of small freelance projects, I’ve had only a handful of productive writing sessions since the middle of January. I’ve written fewer (fiction) words in the last 2 months than I expect to turn out in a single day when things are going well.

So…let’s talk about frustration, and about failure, shall we?

I mentioned once before, in a previous IWSG post, that momentum is everything in writing.  That writing involves pushing that Sisyphean boulder up the hill.  Well, I stopped pushing…and the damned thing ran me over.

Hemingway and a host of others aside, the answer is not to crawl inside a bottle.  Nor is it to retreat from the world, just as it isn’t to run off and join the circus.  Not anymore than it is to rant and rave and blame the universe itself for the blank screen on my word processor.

I’ve given the advice to others…more than once.  I just can’t seem to give it to myself.  For me, the answer is to go simple, to “navigate small,” as I put it another post.  I know that.  I know it very well.

I don’t talk about my own failures very often.  Hell, I don’t generally talk about them at all.  I’m far too proud, and far too private, to (generally) dive into that particular pool, but…

But, there’s always a but…

Besides…if writing blog posts and microfiction is where the words are at this moment, who the hell am I to argue? 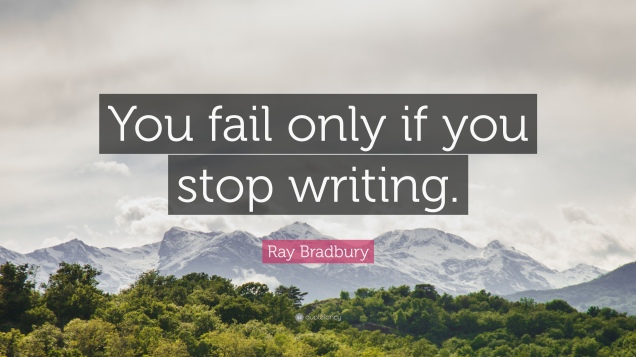