Sports has its problems, I will most definitely grant you.  In spite of those problems, however, there is…something there.

When you get right down to it, sports are the ultimate expression of what makes humans human: the competitiveness, yes, but also the loyalty and commitment and urge for perfection that started us thinking, “Hey, maybe this evolution-thing ain’t so bad…”

At its worst, sports is greed and immaturity and “look at me!” entitlement.

But at its best, sports is artistry…and one of the truest meritocracies there is.  The Williams sisters are not great black athletes, nor great female athletes, they are great athletes.  Full stop.  No modifier needed.  Sports is meritocracy, and they can take their place right alongside the best to compete — alongside the Michael Jordans, and Tom Bradys, and Lionel Messis.

But this isn’t about the beauty of sport, nor the perfection of the best.  No, this about the other side of sports…the more valuable side: this is about the honesty of competition, and the random, stupid, crazy things that sometimes happen…

To compete at the highest level in any professional sport — be it the NFL, MLB, NBA, NHL, Premier League, what-have-you — takes a lifetime of training and commitment that doesn’t just pass common sense, it approaches monomaniacal insanity.

You certainly wouldn’t put a full-time accountant out there to play. 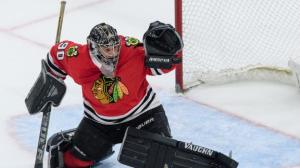 The NHL allows each team to dress two goalies for their games.  That’s it.  The team’s other goalies are playing down in the minors, not sitting on their asses watching games.

So what happens when both the starting and back-up goalies get hurt?

You suit up the damned accountant, that’s what.

A man who last played competitively fifteen years prior.  A man who works a calculator by day.  A man who plays beer league hockey for bragging rights.

My God, what a disaster!  The team will lose!  The players will quit on the game!  The fans will leave the arena faster, even, than the other team will score!

In hockey, we have a tradition: the three best players in a game, regardless of the team, are named as the “3 Stars”.  Scott Foster, thirty-six year old accountant and beer league goalie, didn’t just win, he stopped every shot he faced.  He shut-out the best athletes and players in the world for fourteen minutes.  The fans chanted his name.  The players mobbed him.  He was the 1st Star.

And the next day he was right back to his calculator and his spreadsheets.

That is the best of sports.