I know this will shock you — given that I write sci-fi, and all — but I love astronomy. I listen pretty fanatically to a handful of astronomy podcasts*, I buy astronomy & cosmology texts alongside the vast numbers of history books I collect, I can (and do!) still work a telescope for long nights of observations.

*And, yes, they are in fact kinda like the old “astronomy/cosmology for idiots…err, non-majors” courses back in college…

All of that means, of course, that I also pretty fanatically follow current missions and discussions and debates about space exploration. Crap, I remember sitting in my living room and watching the “live stream” of Voyager 2’s encounter with Neptune. The data didn’t really make much sense to me, given just how much interpretation and adjustment it requires, but I nerded out on it nonetheless.

Why am I writing about this? 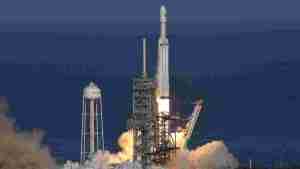 Well, the recent test flight of the Falcon Heavy got me to thinking. First off, it is nice to see some options for (relatively*) heavy-lift become once again available. It was also seriously geek-worthy to watch the two secondary boosters land themselves pretty much simultaneously. That the primary booster did not also successfully land was an important learning experience that in no way detracts from the accomplishment. The ability to re-land and re-use boosters is a vital element of practical and affordable launch systems — and the space shuttle’s “drop ‘em in the ocean” system was, well, pretty damned inefficient. 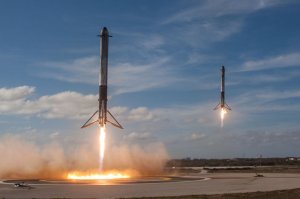 But the biggest part of the whole thing? Getting launches into private hands, and opening LEO to be an economic asset (and battleground). Look, NASA is phenomenal at pushing the boundaries, and at exploring and furthering our knowledge and understanding. It is, on the other hand, absolutely shit at turning those accomplishments to practical endeavors.

And you now what? That’s okay, that’s not what they’re there for. They’re there to explore, not to exploit.

Want to make space — more specifically, low Earth orbit — accessible and efficient? You gotta open it up to people to make a buck, then. Right now that is pretty limited to the launch systems of SpaceX and Blue Origin, but even baby-steps can get you there…

The astro-nerd world is currently roiling itself up pretty seriously in regards to the Trump Administration’s recently released “plan” to begin phasing out the International Space Station after 2024 with an eye to turning it over to commercial enterprises.

At first glance that sounds nuts…but only at first glance. That plan actually is one I am happy to hear, for a few reasons:

1) The damned station is ridiculously expensive and complicated to operate given that it is controlled and funded by the bureaucracies of no fewer than FIVE space agencies (US, Europe, Japan, Russia and Canada). Keep in mind, none of the other four have shown any interest whatsoever in funding the ISS after 2024, and we sure as hell ain’t gonna pick up the whole tab.

2) NASA, as I said, is bad at following up exploration and discovery with practicalities — the ISS is little more than a laboratory to learn about the human capacity to live in space for prolonged periods. The other experiments and tests that happen up there are basically 75% public relations.

3) A private company — more likely a consortium of several deep-pocketed corporations — could turn it from PR stunt into a legit lab for practical, realistic engineering needs. The speculation is that micro-gravity can help in the manufacture of things like fiber optics, certain pharmaceuticals, some metals & ceramics, and a handful of other applications. NASA doesn’t give two shits about that, it’s not their mandate. Commercial enterprises, on the other hand, can and will turn the place into a test-bed for technologies with potentially direct benefits to those of us here at the bottom of the gravity well.

NASA gave us shit like Velcro, carbon composites, Mylar, and automated flight computers — even Tang, for God’s sake! — but it took private companies to turn those into everyday tools. And that is not a bad thing.  No government agency on the face of the planet understands efficiency, or commercialization, or supply and demand…so let’s find ways to encourage those who DO understand those things to get involved. Let’s let trade once again follow the flag.