Ok, look…I know the hair may be going a bit grey, and my knees make more noise than a popcorn machine, but that does not mean I’m old!

If you’re only as old as you feel, I’m pretty much stuck in my early twenties.

So, the other day I had to get three new kids checked out with their banks so they can start working as cashiers. Yes, I said “kids”…deal with it. All three spent the entire 20 minutes saying “yes, sir” and “no, sir”. I felt like goddamned Methuselah. 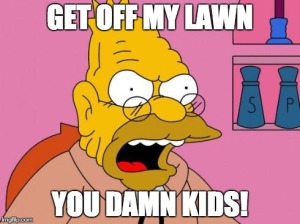 But – and this is the important bit, kids – we cagey old bastards always get our revenge. There ain’t a 22 year old in the world who can keep up with me when it comes to whiskey.

Take that, youth and energy! Age and cynicism win again!!

Now where the hell is my walker? I feel like shit this morning…

The biggest problem up here isn’t finding good beer, it’s finding people who appreciate good beer. There is far too much PBR and Bud Light flying around for any self-respecting beer-snob to keep his or her sanity. Crap, I have to spend more time educating these folks on decent beers than I do actually drinking.

On the other hand, with this many folks from backgrounds so different and varied, I am getting a ton of new music to listen to. That is a very good, and very welcome, thing: my writing needed an infusion of fresh music. The old soundtrack was getting a bit stale, and it was starting to come out in the words themselves. New music means new thoughts and new outlooks…that can be almost as valuable to me as the change of scene has been.

By the way: if the last couple of posts seem a bit choppy it’s because, well, they are. I’m currently sitting outside trying to catch the last of the sun while I write this pout – two hours ago it was 65, now it’s 40…and In two more hours it will be in the high 20’s.