One of the things I’ve accused myself of in the past is taking these posts too seriously. Oh, I don’t mean to imply that I shouldn’t give them thought, and try to say something important and meaningful. But I have been known to flex my “introspection muscles” and write posts that can skirt desperately close to the line of  self-indulgence.

Nope, don’t want to do that…not now, not today.

Took myself waaay too seriously on that one. I also had…err…well…nothing to really say in it, so it was a lot of words accomplishing very little.

Shit, I did enough of that in college. That is not a (bad) habit to which I really need to return.

So, to get to something equally pointless…but far less serious: the pub. Specifically, the employee pub. 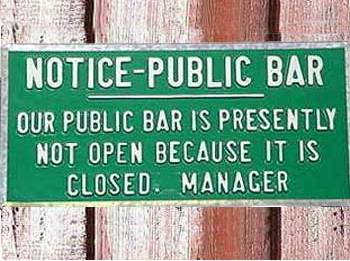 It’s not open yet.

There are, in fact, claw marks on the door from my first encounter with that locked entrance.

Then someone told me it won’t open for another couple of weeks.

Are you kidding me? Even prisoners can get booze*, for fuck’s sake!

Now, I’ve talked to some of the folks who have done this summer work thing up here for a few seasons, and I know the pub can be…well…questionable (a bit like the donkey-bar in Tijuana can be questionable). But, crap…no one is here yet! There’s only a relative handful of staff around right now (within the next month another 500ish will arrive in my little “village”), so shouldn’t it be a nice place to have a drink or two after work?

But the universe hates me and it’s closed.

So just what do I have to do? I have to pretend like I’m nineteen again and visit other folks’ RVs or dorm rooms to have a few drinks with ’em. Shit. If someone mentions homework to me, I’m gonna feed ’em to a damn bear.

So…now…it’s off I go to gather a six pack of a local craft brew and a flask of scotch, then to a gathering of like-minded degenerates…err, co-workers. If I get raped by a bison on the way home, I’m gonna be pissed.