In a world that’s given us the Pyramids, and the Great Wall, and the Colosseum…

In a world with sonnets and haiku, painting and sculpture…

In a world with the Kardashians and shows about house flipping… 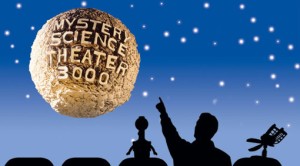 But in the world I hint at above, just what is the apex of human creativity and endeavor?

Sadly, MST3K ended almost two decades ago. There is, however, a successor* that makes me very nearly as happy: RiffTrax.

*There is a second, different successor in the works from NetFlix…great, now I have to subscribe to NetFlix!

Now, if you are so culturally-deficient as to know nothing about these shows, let me proselytize for a moment. Take a bad movie* and have three very funny people make fun of it while it runs. It doesn’t sound like much, but you haven’t lived until you’ve watched “Manos: Hands of Fate” from MST3K. If you want to go for your pop-culture PhD, you need to step up to “Birdemic” from RiffTrax.

I have been, for the last couple of weeks, binge-watching the shit out of RiffTrax now that they have a bunch of stuff available on Amazon Prime. You have to understand the depth of my love for these guys: their stuff is FUNNY. I have almost pissed myself laughing more times than I can count just in the last three or four evenings.

Now, what does this have to do with writing?

Believe it or not, there IS a point to this post!

One of the things the guys do is mock – mercilessly – all the shitty scenes that (inevitably) make up bad movies: “So, we’re just driving I guess…” “No, don’t stop the scene! I need to see at least five MORE minutes of some nameless guy making coffee!” “I don’t know, an hour of tensionless exposition seems appropriate for a ninety minute action movie…”

You get the point. And, yes, I’m just throwing together context-less memories of their comments…watch their damned show(s)!

When I was sitting there planning the scene list for Silence – and even as I began writing and revising the actual story – those voices were bouncing around inside my head.

“Err…what would Bill, Kevin and Mike say about THIS scene? Dammit, now I have to change the whole stinking thing…”

I wonder if anyone else hears several snarky, cynical comedians inside their heads when they consider their own stuff? Or is it just me?

Never mind, even I know the answer to that one…

The bottom line is this: if you want to figure out what’s wrong with your story, watch MST3K/RiffTrax. Enjoy the shows, laugh your ass off, but pay attention to those things they are mocking. The same sins that ruin so many movies can very easily ruin just as many (if not more) novels.